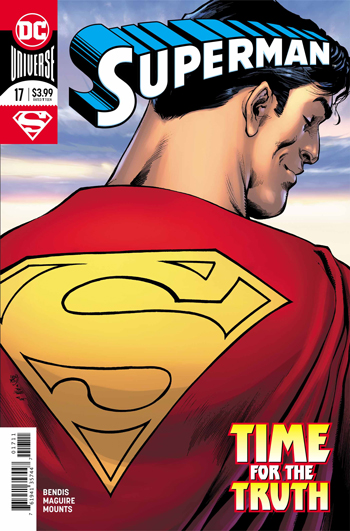 The last issue was a pretty decent one. This issue became instantly promising once I found out that artist Kevin Maguire was attached to draw it. I was immediately intrigued as he is one of the best artists that the comic book medium has had.

So, how does this issue fare?

Well, it starts off in a pretty fun way. Superman is in space and is in the middle of a fight between two aliens. It is a pretty cute scene (almost a little too cute). But the art by Maguire really sells it with the facial expressions. I enjoyed what I was reading very much.

From there, Superman goes to Earth and heads right to Lois Lane. They talk about how Lex Luthor visited Lois the night before and offered her a lead lined box.

What is in it?

What does this mean for Clark?

He knows that it is basically a trap that is set up by Lex. But what kind of trap and what are the ramifications from it?

Lois and Clark catch up with each other. It is another nicely drawn sequence by Maguire. There then seems to be some trouble brewing in the desert. We get to see a scene there. Something is coming. Something big.

We then get a scene where Superman meets up with Supergirl. They meet up with Zod. Then, the issue basically ends. No, what I mean is that the issue suddenly just ends mid-scene. It was so noticeable and weird that it actually made me mad. The issue was going so good too that it was a shame.

So, the issue is decent until it craps out on you. The art is some of the best of Maguire’s career. I am sure that the story picks up next issue right from where we left off. I hope so. This was just awkward.