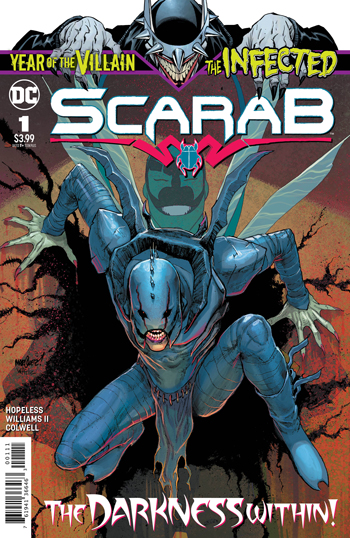 I haven’t read a good comic book about the Blue Beetle in quite awhile. And truth be told, I have never been a big fan of the Jamie Reyes version of the character.

I just could never identify with him. That being said, this issue is probably my favorite story featuring that character.

It seems that The Batman Who Laughs wants to get his hands on the scarab that turns Reyes into the Blue Beetle.

And he is determined to get it. The issue starts with Reyes having a dream about the Scarab being taken away from him from the evil Batman.

It is one hell of a beginning.

Jamie tries to go about his day. It isn’t long before he has to turn into the Blue Beetle though. He goes about his day, being a superhero. He eventually comes up against a strange looking thing that blasts him. That is when he becomes infected. And then the issue goes crazy from there.

The Blue Beetle becomes a grotesque version of himself. We get to see him go on a destructive rampage. It is actually a lot of fun and I was enjoying it. Then, right when I was totally getting into it, the issue just abruptly ends.

That is the problem with these Infected books. They don’t really resolve anything in them.

Instead, they all come off like an exciting first chapter and not much else beyond that.

The art by Williams is the best part of the book. He does a great job telling the story and he hits the horror moments of the book perfectly. It elevates the book from being forgettable.