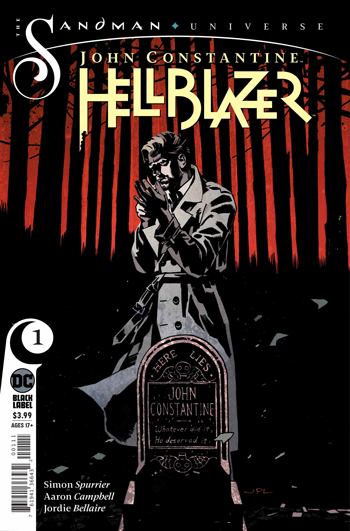 Hellblazer was one of my favorite comic book series. It was a consistently enthralling book that really just went for it. In recent years since the comic ended it’s Vertigo run, we have gotten a pasteurized, neutered John Constantine.

I am happy to report that this version here is the closest version to the one that I loved. It is still feels a little less strong than the classic Constantine, but it is the best version of him that we have had in years.

And that is saying something.

The good news is that right from the beginning Constantine is back in London!

When I saw that in the synopsis, it was enough to get me going. The opening two pages have some sort of paranormal attack happening. It is freaky and scary and is a nice set up to the rest of the issue.

After that, we finally get to see Constantine again.

And visually, it is one of funniest character introductions that I have seen in quite awhile.

It is John Constantine getting thrown out the front door of a building. Aaron Campbell beautifully draws this page and it instantly brought a smile to my face. Constantine starts talking to some of the locals. He has some good conversations here. He meets a woman. They talk. Then, they have some sort of weird fight with a scary and strange looking character. It is very enjoyable.

Constantine then gets involved with some people who are responsible for that weird event on the first two pages. Apparently, he gets an offer to perform an exorcism. He agrees because he needs the money. But as the issue goes on it does get increasingly strange.

But that is okay! Spurrier keeps the whole thing going. The real star here is artist Aaron Campbell. His visuals are perfect for this book and really are quite stunning. He always does quality work but this may be his best artwork that he has done.

The ending does have a nice twist. However, as much as I enjoyed this, I still had the nagging feeling that this still wasn’t the John Constantine that I remember. But that is okay. It is the closest that they have had to classic Constantine in quite awhile. And that is a step in the right direction as far as I’m concerned.