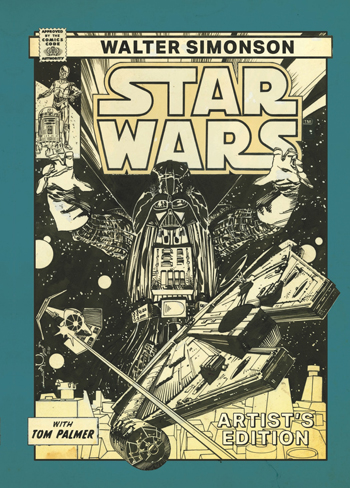 Yes, here’s another review-proof Artist’s Edition. If you like the artists involved, you will like this series. Period.

The one at hand is the Walter Simonson Star Wars Artist’s Edition. I have to admit that I had moved on from the Star Wars comic book by the time these Marvel stories originally emerged in late 1981 so the stories, by David Michelinie, were new to me.

They were okay, I guess. But the books in this series aren’t about stories.

And Walt Simonson and Tom Palmer are old favorites.

The first thing I have to ask is whether Tom Palmer, as the inker, had to buy his own ink?

I ask this because he sure uses a lot of it herein. As with the previously reviewed Colan/Palmer Dracula Artist Edition, this book is as much a collection of Palmer original art pages as it is of Simonson. Unlike the seeming perfect fit with Colan, though, here the two artists often seem to be—although I’m sure they weren’t—jockeying for position.

Simonson’s work is all about lines. Lines, lines, lines. He can make magic with lines! And circles! Walt uses lots of circles, too. Palmer’s work, by contrast—literally—is all about blacks and tones and screens.

In their Star Wars art, each sometimes overwhelms the other. Walt’s lines and circles are evident in a lot of places but from the darkness of space to the shiny metal of Darth Vader’s familiar helmet, Palmer’s solid blacks are everywhere.

And that’s not a bad thing!

The two together make for a particularly interesting mix when perusing these black and white pages of actual pencils and inks as opposed to the smaller-size original color comic books. Once again, the reader finds themselves poring over certain panels and seeing how well the artists pulled off a certain special effect with just a few lines and some black ink.

The Artist Edition series is all about the art and every one I see has given me a whole new respect for what these artists have been able to do as far as both sequential storytelling and individual pages and panels as compositions.