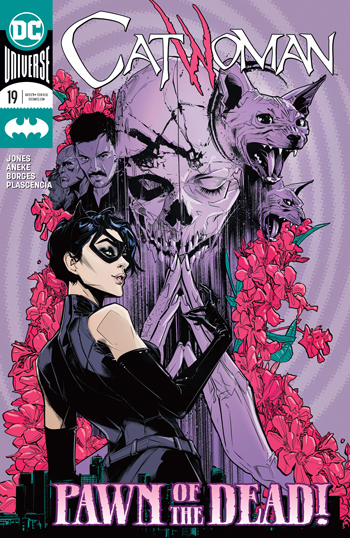 The battle between Catwoman and Raina Creel intensifies in this issue!

Joelle Jones is doing such a great job with the writing on this series. It has been a very exciting ride that has not let up! This has been a bunch of fun and a really great comic to get into.

A signal had been put up in the sky by Raina Creel that has turned people into monsters. The opening scene is crazy, with a big zombie like attack. Carlos and Selina’s sister Maggie are trapped and are preparing to fight back against the army of the dead.

Things are looking pretty hopeless from the outset of this.

We then see Selina racing to the scene! But she may not get there in time. Carlos puts on some gear and gets ready to attack this army of the undead. He attacks! He is quickly overwhelmed. Selina hears it from where she is at that moment and races to save his life!

Selina arrives and quickly joins the fight! Carlos isn’t too happy to see her and they bicker while they fight. Even with both of them fighting however, it may not be enough. That is when Aunt Linda arrives just in the nick of time to help them! It is a really cool moment!

The rest of the issue has everyone regrouping. There is a tragic moment as well. We also get a scene with Raina Creel. This scene serves to show how evil she is. It also shows how her evil plan is progressing. The last part of the issue is a set up for the next one and it is a very interesting one overall.

The art is a little strange. There are three artists working on this title so it is a tad jumbled. It only brings the issue down a little bit though. The story is very good and it shines through.