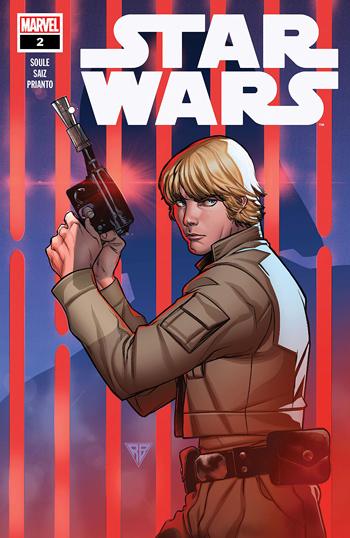 Little by little, Charles Soule is changing our perception of events that occurred immediately following The Empire Strikes Back.

One would assume that Boba Fett dropped off a carbonite-chilled Han Solo ASAP upon leaving Bespin. It turns out, that is not the case as Lando, and Chewie get to Jabba the Hutt first.

Fett’s whereabouts at this point are fascinating. Is he just taking his sweet time getting to Tatooine or is the galaxy’s most feared bounty hunter shopping Solo to the highest bidder?

After all, it’s not hard to imagine Han having multiple bounties on his head.

Soule creates tension in multiple places throughout the story. In the last issue, Luke Skywalker was emotionally shaken over the infamous “No…I am your father.” moment.

This time around, Luke is adjusting to life with a robotic hand. Things aren’t as easy for him as they once were, and there are those who look at him as damaged goods. Lando tried to swindle Jabba in a moment that was interesting to watch unfold. Seeing Lando attempt to use Tibanna gas as a bargaining chip with Jabba (although he no longer owns the mine) was a plot thread that had to be carefully navigated considering the role he plays at the beginning of Episode VI.

We get our second mention of the High Republic, which was first cited in The Rise of Kylo Ren #2. Two mentions in less than thirty days lend more credence to the rumors of this unexplored era of Star Wars being the focal point of the next series of films. There is nothing revealed about the actual period; however, just seeing it talked about more and more is exciting.

The artwork of Jesus Saiz does a serviceable job with the book’s visual presentation.

However, the pages spent in Jabba’s Palace will transport the reader to the gangster’s dingy and dangerous surroundings. Lando gets a close shave from the axe of a Gamorrean Guard for his transgressions and seeing him continuously wipe the blood away highlighted how close he was to meeting his end.

Now, we know that Lando survives, however, he’s always been the picture of confidence with many irons in the fire. Now, he’s on the run like the rest of The Rebellion. Lando has received the most page time thus far and Soule and Saiz work well in tandem to present this incarnation of the character.

The whereabouts of Luke’s missing hand and lightsaber is mentioned, promoting what will be a search for these items in the next issue. It will be interesting to see if this will finally answer the “good question for another time” in reference to how the saber came in the possession of Max Kanata.

Tension is the name of the game Charles Soule played here.

Everyone from Luke, Lando and the Rebellion are struggling with their new lot in life. Some people are unsure of themselves, while others are not to be trusted with the question of “how dangerous is too dangerous?” looming over everything. This is an engaging second installment that poses new questions and ideas to a familiar story.