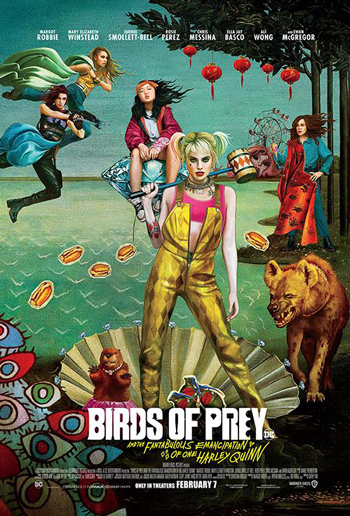 In Gotham City, it seems like no one likes Harley Quinn, except for the Joker.

And unfortunately for her, that ship has set sail. After a breakup that was a longtime coming, Harley is out on her own with a target on her back of her own making.

How is this suddenly free agent going to handle the endless tide of people she has wronged without the protection of the Clown Prince of Crime?

With jokes, great fight scenes, and a crew of women bonded together in a need for survival. Although it starts slow, this latest foray into the DC Universe is not your average comic movie nor your traditional chick flick.

And that’s got its pluses and its minuses.

Margot Robbie is a talented and charming actress who only got to scratch the powder white surface of Harley Quinn in Suicide Squad. She is infinitely more interesting on her own than she ever could be as a Joker sidekick. Harley is also far more skilled in combat than anything that we have seen before on the big screen. One of the highlights of the movie were her plentiful fight scenes which showcased a physical prowess that goes far beyond swinging a tattooed bat.

All the women have significant battle abilities, and refreshing to see women kick so much ass. At no point does director Cathy Yen shy away from the blood, violence, or the near-routine sound of bones snapping every few scenes.

But a good comic movie is more than just broken bad guy arms and car chases.

The sections in between, where Harley is trying to figure out who she is in a world without Mr. J. can be hit-and-miss. Thankfully, everyone does better with someone to protect and what would a comic book movie be without a (near) innocent to save?

As a ragtag group of varying degrees of righteousness circles up to protect Cassandra Cain (played by a wise beyond her years Ella Jay Basco), we see start to see a classic ladies getting each other’s backs motif.

At one point Harley even compares it to a sleepover, which makes you wonder what kind of pillow talk would a disgraced cop, a vengeance killer, a moody lounge singer, and an emotionally imbalanced gun-for-hire would have.

Everyone falls quite neatly into their trope, in a way that seems to set up the Birds of Prey for future films rather than tell a coherent story from the jump. It’s Harley’s emancipation, but you cannot help but feel that the other characters are significantly underserved when it comes to exploring their motives. But the small taste of what could be if all of these characters were allowed to spread their wings is worth the slapdash editing and choppy timeline.

With so much girl power naturally occurring inside the group, it seems a bit strange to make the male characters so grossly misogynistic in their hatred of all things women. Ewan McGregor’s Roman Sionis (aka Black Mask) could have been a wonderfully campy villain if not for shoehorning in extra scenes and throwaway lines to reinforce a “all men are evil” trope. There should be more trust in the audience to read between the lines instead of smacking us in the face with broad and bland sexism.

As a first foray out from the shadows of the Joker’s storyline, Birds of Prey clumsily showcases how powerful Harley Quinn can be when she leans into trusting herself and a select few around her. With a timeline that’s as manic as the pixie herself, this snapshot of post-breakup Harley signals the start of something wildly beautiful.