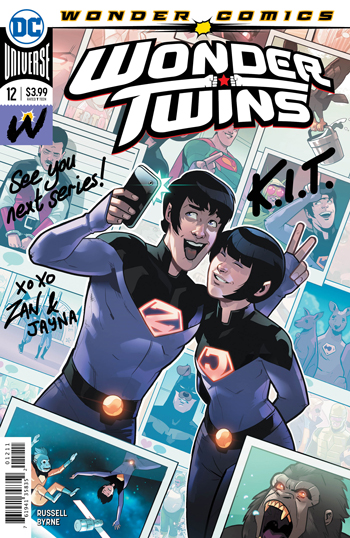 This book was one of the best new releases of last year.

It is a funny and entertaining book that consistently delivered. Mark Russell is one of the best writers to emerge in the last few years. I am sad that it is the last issue as this has been a true delight.

The last issue of the series is about toxic nostalgia. We get to see Jayna do her morning announcements. Things are kind of getting depressing as she reads them. That is when Jayna and Zan head over to the Hall of Justice.

When they get there, Superman and the Justice League are waiting for them.

The League is upset with them because they have helped a fugitive escape and they have caused general mayhem. The Wonder Twins then leave as they are upset.

We get to see Lex Luthor causing some mischief. We also get to see the Wonder Twins get into one last fight.

The issue ends much like the series began. The last few pages are the best of the series too and it is well worth reading to get to that point. It’s actually wonderful.

This is a great series that never failed to entertain. Mark Russell deserves praise for making this relevant to modern times yet keeping it highly enjoyable without forcing points down our throats. The art by Stephen Byrne is a real gift as well. This is a well done series overall and a great last issue.