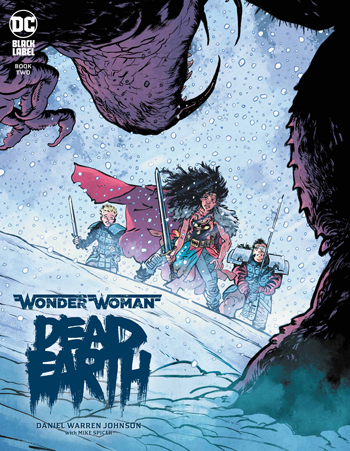 Man, the first issue of this book blew me away.

Daniel Warren Johnson is one hell of comic book auteur. This book is nothing short of spectacular. This issue really advances the story and it is one hell of an adventure as well that the reader goes on. We are in the hands of an expert.

The issue starts with a flashback with Wonder Woman fighting Nubia. It is a harrowing fight that almost ends in tragedy. Thankfully it doesn’t but it does come close.

From there, we flash forward to the dead earth that Wonder Woman now finds herself a part of.

We get to see Wonder Woman leading some survivors through this terrible earth. She eventually comes across a terrible creature and she must lead her army to try to take this monster out. It is a beautifully drawn sequence that shows how powerful of a creator Johnson is.

After they defeat the monster, they regroup a bit. Then, they finally get a glimpse of the evil that they are up against. This leads into the last couple of pages of the book. I was pretty numb after reading it and wanted the next issue as soon as possible.

Daniel Warren Johnson is an auteur of the highest caliber. He is still very young, but man, is he putting out some amazing work. The writing and the art are brilliant. This will end up being a classic Wonder Woman story.