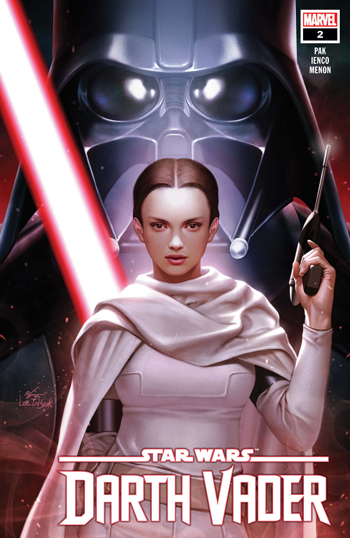 Darth Vader is on a rampage to destroy everyone who had a hand in hiding his son Luke Skywalker from him.

A look to the past brought about the face of Padmé in the flesh. Greg Pak introduces this plot point in scintillating fashion.

At first, Padmé’s appearance seemed to be a ghost or a mirage. Then, it became all too real as this was a living, breathing human being with the face of Vader’s deceased wife.

Vader’s new forensic droid ZED 6-7 quickly uncovered the truth that this was not the former Queen of Naboo, but her former handmaiden Sabé.

Sabé first appeared in The Phantom Menace, where Padmé revealed her as a decoy and royal bodyguard.

Sabé has a hardened personality from years of war. She was openly defiant and spoke to Vader in a way that would’ve gotten most people force choked to death.

However, their goals are similar, and they join forces to discover the answers that have alluded them. This is the closest Darth Vader will ever get to getting his wife back. Emotionally, Vader is in uncharted territory with a woman that not only looks and sounds like Padmé but was also her best friend.

“Don’t be afraid,” Vader uttered as he tried to calm her down. When is the last time anyone saw Darth Freaking Vader do that with anyone? If you’re a Stormtrooper, it’s kind of like watching your boss let someone he just met call the shots. You don’t know why, and you don’t dare ask.

Raffaele Ienco’s character work of Darth Vader marvelously conveys certain elements to augment the story. Physical reactions and body posture show Vader being uncharacteristically comfortable with another person. He stood close to Sabé as a means of comfort, vowed that they would find revenge together, and instantly let her fight beside him. There are a couple of panels where the tilt of Vader expressionless mask tells the reader everything they need to know.

There are many ways this story arc can go moving forward. How long of a leash will Darth Vader give to his new friend? Will he fall for his wife doppelganger? Perhaps, Sabé discovers his true identity.

Greg Pak deserves a lot of credit for turning a minor Star Wars character into a big deal as it relates to this budding series.