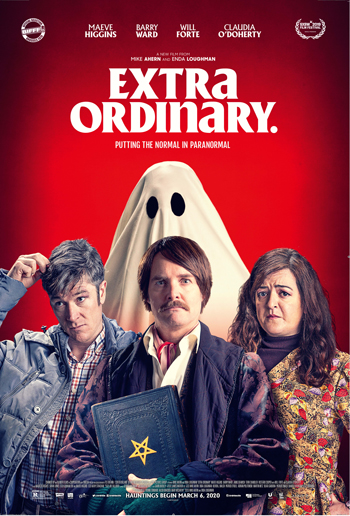 It’s not often a movie like this comes along.

Extra Ordinary is a movie that is all together a romantic/horror/ black comedy with a heart.

Extra Ordinary is tough to describe in a simple logline.

I always find movies that need more description than a simple sentence, tend to be better films.

And this is one of those films.

Extra Ordinary, set in rural Ireland, is a film about a kind driving instructor named Rose with an interesting past.

Rose is a former psychic in a small rural Irish town who gave up the life after accidentally killing her own infamous ghost hunting father. Rose turns down offer after offer to return to ghostbusting to make sure she never again does harm. That is, until reluctantly agreeing to help a desperate man named Martin.

Martin, who is haunted by the mean spirit of his dead wife, seeks out Rose’s help under the guise of taking her driving lessons. After initially turning him down, Rose agrees to help Martin, once his daughter Sarah becomes possessed by a washed-up American rock star.

Rockstar Christian Winter, a one-time-one-hit-wonder, is eager to make a comeback by striking a deal with the devil to become famous again. Winter needs, you guessed it, a virgin sacrifice to make it happen. In steps Rose who must thwart his plan before he conjures up enough evil spirits to kill young Sarah.

While this all sounds very silly, and it is, the cast is so perfect it makes the ride well worth it. Rose, played perfectly by Maeve Higgins, is utterly charming as the troubled lead.

Higgins easily navigates the pitfalls of a sad, sweet, lonely heart, while never failing to deliver on what makes Rose so special. We understand why Rose feels responsible for killing her father, shown later in a hilarious flashback, and how she now carefully approaches life.

Maeve Higgins doesn’t have an extensive resume at the moment but I’m sure that will change after this. The way her character delightfully misunderstands things is super endearing. There is something great about getting in on the ground floor of such a wonderful actress’s career and I look forward to what she does next.

Christian Winter is hilariously played by comedian Will Forte. Forte commits completely to the absurdity of the demonic ritual which includes, among other things, finding a local virgin using a penis-shaped staff. Other stand-out performances include Barry Ward as Martin, and the devilishly funny Claudia O’Doherty as Winter’s passive aggressive overbearing wife.

They are played for laughs, as is the sexual innuendo, but all are tame considering so many far worse PG-13 movies that skirt an R rating.

Overall, I think Extra Ordinary’s R rating is silly considering the powerful message of friendship and female empowerment the movie has. Don’t let it chase you away.

Extra Ordinary lends itself perfectly to a sequel or TV series. There have been plenty takes on the occult ranging from gross to Ghostbusters, but I think the world can use one more set in a sleepy Irish town.

I highly recommend it.

Extra Ordinary is available on DVD, Blu-ray, and On Demand.

Fred Shahadi is a filmmaker and writer living in Los Angeles. He is the author of the cult speculative fiction novel, Shoot the Moon.