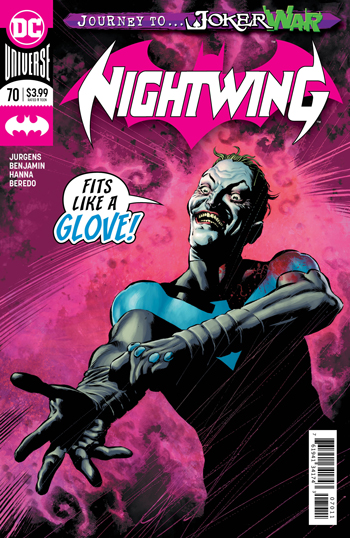 This book is a good comic book that is pretty consistent from issue to issue. Writer Dan Jurgens has been doing a great job keeping the story compelling. Each issue over the last year has been interesting and well handled.

This issue continues that trend. It also is the beginning of the Joker War storyline.

The beginning of the issue shows a helicopter in a bit of trouble.

It was a cool start.

We then get to see Richard jumping through the city. While he is doing that, we get a recap of everything that led up to today for him.

This part was a little boring as I already knew the story and just wanted to get on with it.

We get to see one of the Nightwing Squad being attacked by the Joker. It is a brutal sequence.

Then we see the Joker actually looking for Nightwing. Richard comes across Bea and they have a good scene together. And the ending page is one hell of an image.

The story by Jurgens is fantastic here. The art by Ryan Benjamin is a welcome addition. His art moves the story quickly.

This is another fine issue of the book that promises some exciting things coming up next!