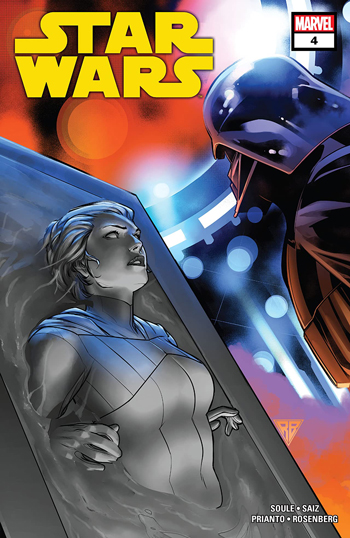 That is what I wish I could write.

Unfortunately, this installment is practically hollow and sets the readers up for a new adventure when promises from the previous one are left unfulfilled.

Let’s talk about the cover of the book. Darth Vader examining Leia frozen in carbonite, was a super intriguing concept.

However, Star Wars strayed away from that practice until now. Vader does not appear in the book, and Leia was unfrozen as quickly as she was captured.

A throwaway line about how it’s easier to free people who have only contained in carbonite for a short time is used. If I remember Empire Strikes Back correctly, death was the only assumed conclusion for putting a human in carbonite.

Luke failed to find his lightsaber in a sea of trash on Cloud City. A few moments later, an Ugnaught finds the Jedi weapon. This might serve as the start of how Maz Kanata came in possession of the saber, but that story probably won’t occur in this series.

Honestly, this book can be summed up in a few sentences.

Luke and Lando rescue Leia. The three of them rescue prisoners, and in the process, Luke is like, “Oh yeah. I left my X-Wing here,” and the team narrowly escapes. Luke also feels the presence of another Jedi. He senses that it’s a woman but nothing else and goes out on his own to find her.

The thing is, this same hooded Jedi caught Luke’s lightsaber at the end of the first issue. Luke doesn’t know that, but we saw it, and she didn’t take it with her? It doesn’t make much sense and left a big question unanswered.

The online rumor mill has allegedly uncovered the Jedi’s identity, and many believe she will continue Luke’s training. If the rumors are correct, it’s a big letdown because the character is not even that well known to diehard fans.

Overall, this book quickly concluded the first narrative arc and set up the next.

At least the first three issues showed some TLC along the journey. The same can’t be said here.