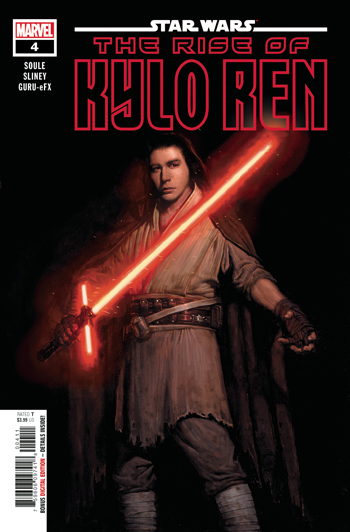 What started strong unfortunately ended in a whimper as Kylo Ren’s journey towards the dark side is complete.

Charles Soule was announced as the writer for this miniseries five months before The Rise of Skywalker was released in theaters. This final chapter makes me wonder if he knew the extent of Palpatine’s involvement before most.

Ben’s rage and uncertainty increased with every outing, which was interesting to see unfold.

Of course, this culminated with Ren finally seeing the light in Ben Solo, tried to kill him and failed spectacularly.

It was easy to predict, but there was no panache.

It felt like, “here we are and let just wrap it up nice and neat.” The Knight’s of Ren simply bend the knee upon seeing the death of their former master.

This was a letdown because it revealed the Knights are simply nomads who follow the strongest wielder of the Force/Shadow.

There was an exciting moment surrounding the creation of Kylo’s crossguard lightsaber.

Sith Lords must bleed a kyber crystal to form their ominous red blade. However, Kylo is not a Sith. The blade was unstable in the sequel trilogy of films, and many felt it was due to a poorly constructed lightsaber as a result of his incomplete training. Charles Soule gave us the answer, which wasn’t clear at first until you read between the lines.

Will Sliney’s artwork stepped up during the saber construction. His illustrations were consistent throughout the series, with no real standout moments until the final pages of this series finale. Most might assume Ben slaying Ren was his final test, but bleeding the crystal was his real right of passage into the dark arts. Sliney’s depictions brought gravity to the fallen Jedi’s transformation from Ben Solo to Kylo Ren.

Overall, The Rise of Kylo Ren series was a fun read at best.

The first two issues answered questions and presented new ones while wrapped up in a great story. The second half of this series suffered from a shift in narrative tone by playing it safe. There is nothing wrong with playing it safe.

However, besides the final few pages, it’s disappointing that so much promise turned into quick and straightforward storytelling.