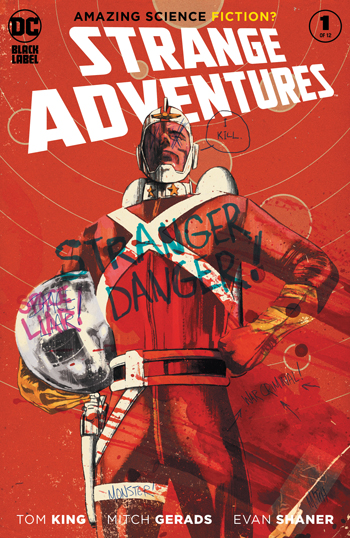 “If you can, just think of this a start of a… Great Adv…”

Welcome one and all to the first issue of Strange Adventures, Tom King’s latest character-driven feature project, starring none other than the pulpiest of DC’s pulp heroes, Adam Strange.

And if that seems like a strange choice to you, for a writer who could pretty much have his choice of projects to work on right now, well… yeah, I guess that’s sort of the point.

Adam Strange has a long history with DC comics, stretching back to the launch of his very first appearance all the way back in 1958.

And if you’re familiar with that history, he’s one of their more recognizable characters.

With his red and white futuristic space spandex uniform, his ray guns and his rocket pack, and the mysterious, translocating Zeta beams that changed his life forever, Adam Strange is perhaps the most science-fiction-y of DC’s heroes – if you mean the science fiction of the early 20th century.

But of course, even if Adam rarely makes it to the A-list of DC’s hero set, he has plenty to recommend him. He’s a veteran soldier – the sworn protector of planet Rann – an inveterate adventurer, an ambassador, a man of action and of derring-do… and a loving husband and father too.

Depending on who you talk to.

That’s the underlying issue Tom King seems set to explore in this series. What makes a hero? What stories are used to define a man? And who gets to tell those stories?

Particularly when one side of that equation involves stories of the most fantastic, out-of-this-world, sensationalism. Across the other side of the Universe.

Adam Strange is presented to us as the sort of man who regularly takes tragedy and turns it into something positive. When the infamous Zeta beams of Rann started shuttling him willy-nilly between two worlds, a lesser man might have given into despair.

Instead, Adam carved out a place of glory for himself on Rann, as a beloved hero, protector, and husband, making a name for himself in the greater Universe, and changing his status at home forevermore.

But what happens to this man of two worlds… when those worlds collide?

That’s where we find Adam Strange and his wife, Princess Alanna from Rann, at the beginning of our story. On a U.S. tour, promoting a book outlining Adam’s latest exploits on Rann: the aptly titled Strange Adventures of course.

It’s a hit best-seller, and Adam is the toast of the town. All seems golden for the celebrated war hero of Rann. But not everything is right in Adam’s world… We’re just not quite sure what.

Except that the realities of politics and publicity on the planet Earth seem a lot more fraught than they are on Rann. Or are they?

To spin that story out, King uses his signature vignette pastiche storytelling approach, one that Adam’s life seems ideally suited to, as King ping-pongs us across the universe in a series of flashbacks to events on Rann, that are themselves all-too rosy in comparison to the gritty challenges of life on Earth.

To really emphasize that distinction, King’s been paired with two different artists for this run. All Earth sequences are handled by the great Mitch Gerads, who worked with King on the much-celebrated Mister Miracle limited series. In striking contrast to the heavily detailed artistry of Gerads pencils, Evan ‘Doc’ Shaner lends his distinctive classic pop-comic style to the sequences taking place on Rann.

Normally I’m not a fan of using more than one artist on a project. But in this case, it serves a definite purpose, and the contrast it strikes is a useful tool in King’s storytelling, one he matches in tone. It’s a contrast that suggests hidden layers to our story, and likely holds more than a few secrets and surprises for us, and for Adam Strange himself.

But before we get there, there’s a bit more story to lay down, just to understand what’s going on. So far, we know that something’s happened on Rann. That something presumably involves Rann’s race of lizard-men, the Pykkt, who seem hell-bent on reclaiming their planet from Princess Alanna’s regime… and possibly invading Earth as well.

At least that appears to be the story. If only we could be certain. Particularly when things start to go wrong on Earth… and Adam takes steps to clear his name.

Even if Batman has to recommend someone with a more impartial point of view to look into things.

Get ready to be transported to a brand-new world of storytelling and intrigue, as Tom King, Mitch Gerads and Doc Shaner, take us on a wild look at one of the most unusual DC heroes of them all.

And those he’s sworn to protect.

Next Issue: Wait, what the heck happened to Adam’s daughter?