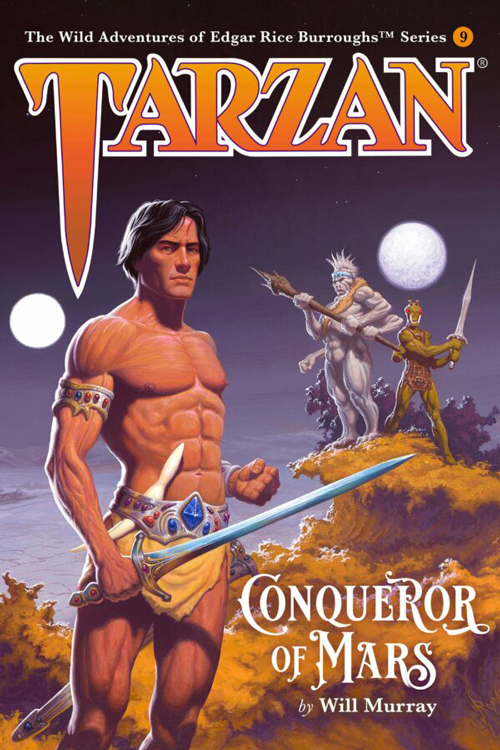 Tarzan, Conqueror of Mars
Written by Will Murray
Cover by Romas Kukalis
Published by Altus Press

Author Will Murray is a chameleon. His non-fiction writing on comics or pulp history is always detailed, impeccably researched, and immensely readable. His Shadow and Doc Savage pulp pastiches read as if they were hot off the newsstands of the 1930s. Now comes Tarzan, Conqueror of Mars, a novel in which Murray gets to play with Edgar Rice Burroughs’ characters in ways Burroughs never did, all the while writing as if he, himself, were ERB.

I must confess to having only a passing familiarity with the original Tarzan novels, but I do have several of the classic John Carter books. Who we have in this novel are very clearly the Tarzan and John Carter of those books, and not the more streamlined, less complex big screen versions.

There really isn’t much plot to the book. It’s basically the Wizard of Oz. Tarzan inexplicably ends up on Mars, meets an unusual group of friends, and heads off to try to find the one person he’s told might be able to send him home.

Of course, that one person turns out to be John Carter, by the time of this story long established as the big muckety-muck on Barsoom.

While “muckety-muck” is, of course, not an ERB word, “Barsoom” most certainly is.

It’s what the Martians themselves call their own planet in the original Mars series. It’s also one of a great many words that Burroughs made up and his readers were expected to learn. Quite a number of those words and names can be found here in this new book as well and, presumably, Murray has added some new ones of his own along the way.

Unlike many actual bestsellers of recent years, at no point does Murray talk down to his readers here. One has to pay attention and keep up or it would be easy to get lost. The author allows for most of the unfamiliar terms to be understood in context and in fact, manages to carry off a fairly breezy reading style that keeps driving you further and harder across the Martian sands. (Hint: Use Led Zeppelin’s “Kahmir” as your soundtrack whilst reading.)

Best of all is the characterization of the two leads. Both Tarzan—or Ramdar as he is known for most of the story—and John Carter are shown to be unyieldingly determined men, hardened and yet dignified, both accepting of their fates and dealing with them in very similar ways.

John Carter had arrived on the Red Planet years earlier and little by little had to re-learn everything he knew as well as fight to earn his place in his new environment. All of that occurred in his own earlier books. In Tarzan, Conqueror of Mars, we see Lord Greystoke in the same position with no trace of panic, just an arrogant determination to make the best of things.

The book is paced nearly perfectly, starting slowly and fascinatingly with the Ape Man adjusting to his new and completely unfamiliar environment. Then we’re shown Tarzan’s swift rise from meeting his first Martians to bringing together and heading up an unprecedented motley crew of all sorts of Martians who had previously wanted nothing to do with each other. Onward they marched, with Tarzan leading by sheer strength of his self-confidence, convinced there must be a way back to Earth and Africa.

When John Carter finally appears, his self-narration replaces the omniscient narrator of the first part of the book. After that, the two types of narration pop up in different chapters for the remainder of the story. While written just as well as the rest of the story, and with John Carter’s “voice” being necessarily different, I can’t get past the fact that it seems an odd narrative choice. Was that perhaps a Burroughs trope I’m forgetting?

Anyway, once the gigantic airship Dejah Thoris delivers John Carter, the two protagonists spar in the seemingly inevitable way two superheroes do when they first meet in comics books. And like those encounters, they eventually come to a mutual respect and defeat a common enemy.

It’s been years since I’ve read any Tarzan OR John Carter, in any form, but I have read lots of Will Murray since and I have to say he never disappoints.

Tarzan, Conqueror of Mars was tremendous fun even with my limited background. If you’re an Edgar Rice Burroughs fan, by this point, Will Murray’s name should be enough to grab your attention!