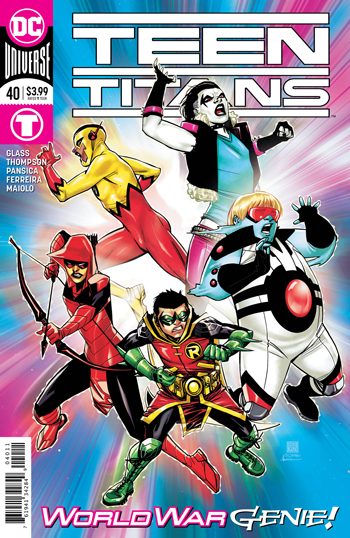 “Please tell me that whatever we have to do next… does not involve going through that door.”

All the Titans have to do is drink specially prepared concoctions designed to bring each of them to a state of near death, then traverse the perils of Hell itself, all the way to the gates of Purgatory, to save one of the most powerful beings on the planet – even though she’s currently in thrall to one of the most dangerous – before being revived at the very last second so that no one, in fact, actually dies.

What could possibly go wrong?

Damian Wayne has a history of talking his teammates into, let’s say, ill-considered courses of action. Y

ou’d think that would give them all greater pause by now.

But what can they do? He’s the only one who has a plan to get to Djinn.

And he’s the only one who knows the terrain.

As off-the-wall, over the top plotlines go, sneaking into Hell isn’t the craziest story you’ve read in comics. There’s even the obligatory sequence of each of our heroes facing down the demons of their greatest regrets.

Frankly, it’s exactly the sort of ratcheted up, character-building set-up we’ve come to expect from Adam Glass by now – this time played out against a crisis of literally Biblical proportions.

Glass has a flair for dialogue that undoubtedly would have pulled it off, too. Unfortunately, his busy schedule no longer allows for full scripting duty here at the end of his own run. And while new writer Robbie Thompson gives it a good go, he doesn’t quite have the kinetic grasp on these characters that Glass does.

The result is an adventure that feels a bit more derivative than it ought to, even though sure, it gives each of our Titans a chance to rise beyond their gravest insecurities.

Even Damian, who pushes beyond the shade of his father Ra’s al Ghul, to finally accept himself for who he really is.

Artist Eduardo Pansica and inker Julio Ferreira are back to tell the second installment of our epic finale. And it’s beautiful work. Pansica is a very accomplished penciller. His composition, layouts, characters – all of it is excellently done. Unfortunately, it’s just not Bernard Chang.

There’s no way around it – after a year of stories brought to us by one of the most reliable teams in the DC bullpen, it is jarring to have the creative tone of the entire book change just as the run finally rounds home to what is clearly meant to be a fairly glorious final act.

I mean, who in this team ever imagined they’d be saving Heaven itself by the end of the year?

Just seems like the sort of thing you’d want to get right.