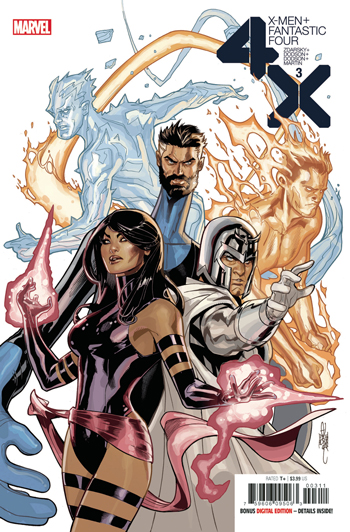 This is a well done comic book. Chip Zdarsky has turned in one hell of a script for this. He has all of the character’s personalities down perfectly and it is full of adventure and is pretty damn fun.

This might just end up being a classic comic for these two teams.

The opening sequence finds both teams in their respective aircrafts. It isn’t long however before they meet up and have a big fight in the air. Some of the X-Men and some of the Fantastic Four tussle. It is a quick fight and everyone’s temper is out of control. Why are they so mad?

Well, everyone is trying to get to Franklin Richards.

Franklin is treated like a valued prize in this book because of his powers.

After the exciting beginning, we get to see Doctor Doom on Krakoa with the two teams. Doom has a plan for Franklin all of his own and he cannot be trusted.

There is a lot of talking that follows. But it is so damn interesting and entertaining I could hardly care. People reveal their motives. Nobody is getting along. And that is when Doctor Doom decides to tip his hand a bit.

The last page promises one hell of an ending. I give artist Terry Dodson props for that last page and for the art in general. It is well done and very expressive. The whole thing is well paced and just a good time. I can’t wait to see how the creative team ends this book.