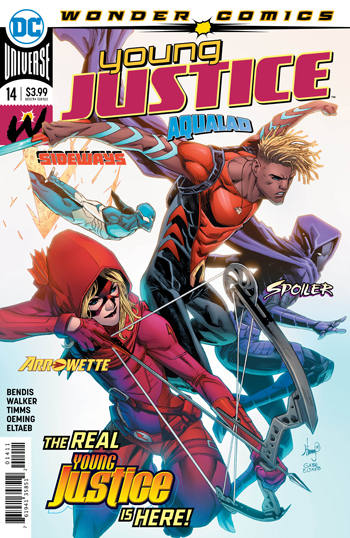 “Are you kidding me? Are we having a team-up?”

Young Justice sure could use someone of your talents right now, with current big bad nemesis Dr. Glory of S.T.A.R. Labs pulling out all her inter-dimensional tricks to keep the team from dropping on her like a ton of bricks.

Not to mention, Superboy is still marooned in Skartaris, fighting a wizard with a Kryptonite sword.

Did we mention that sword was also provided by Dr. Glory herself?

Nasty piece of work the good doctor is turning out to be.

But Drake and Impulse have the right idea. Time to call in the troops.

And so, this issue shows Bart zipping all over the country to recruit Sideways, Aqualad, Arrowette, and of course Spoiler back into the ranks of the Young Justice League, just in time to save the day.

It’s a clever device, and it works well enough to drive the point home. Goodness knows, there’s enough talent out there to fill a full roster of DC’s youngest heroes (and then some) onto the premiere super-team of their generation. (Sorry Teen Titans, but you’re all still working out a bit too much of your own drama at the moment.)

Mind you, there’s still a fair amount of confusion about just what Young Justice is in this world, not to mention just where all its members have been for the last several years…

Too bad the only person who can give them the answers they need just threw the Multiverse at them.

Brian Bendis is finally rounding home with the culmination of the major arc of his latest, greatest, most inclusive Young Justice run. And that promises to give us a few revelations we’ve all been waiting for, as well as a return (most likely) to Gemworld, as we come full circle to understand just what kind of Multiversal dimensional reboot crisis Dr. Glory has unwittingly unleashed on the DC universe. Cracks in the firmament, and all.

With Bendis and Naomi co-writer/creator David F. Walker handling the writing, artist John Timms’ style shifts throughout and any pretenses that these shifts are meant to follow some over-riding narrative design is pretty much gone.

But the kids got it. No worries. That is, unless Dr. Glory has a few more inter-dimensional tricks up her sleeve…

Thing’s are getting good now. So, come join the crowd. And then come back here next month when the gang’s all here, to see just what the heck’s been going on.

And what Young Justice intends to do about it.

Next Issue: I’ll just ask it again, then – where the heck is Snapper Carr? Hm?