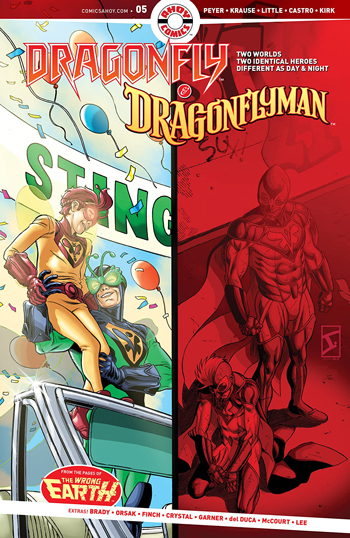 Tom Peyer has quickly shot up the list to be one of my favorite writers and it is because of his work on these characters.

It is at turns funny, sweet and strangely edgy. The writing is so crisp and clean that I can’t help but admire it. His work really is that special.

This issue is the finale of the series. And it is a doozy.

On Earth Alpha, Dragonflyman was robbed of the will to fight. Devil Man is the one who is responsible for this. Stinger is also a victim of Devil Man’s machinations.

On the other side of things on Earth Omega, Dragonfly fees bad because he was mean to Stinger.

He comes back to his headquarters and finds Stinger cutting his wrists. Stinger is trying to take out the tracking device that was placed in him from Dragonfly.

These two stories flip back and forth for the majority of this issue and it is completely engaging.

This story demonstrates the partnership between the heroes on the two different Earths with Stinger. This issue focuses on those relationships and ties up everything perfectly. It is a bit heartbreaking, too.

The Earth Omega story is definitely dark and Peyer takes the story to places you would never expect.
Peyer also works with artist Peter Krause extremely well. Krause is doing some amazing work on this title. This is a great series from start to finish and this last issue is the best of the entire series.

Ahoy Comics has done a great job with their books and The Wrong Earth and this series are a flagship.