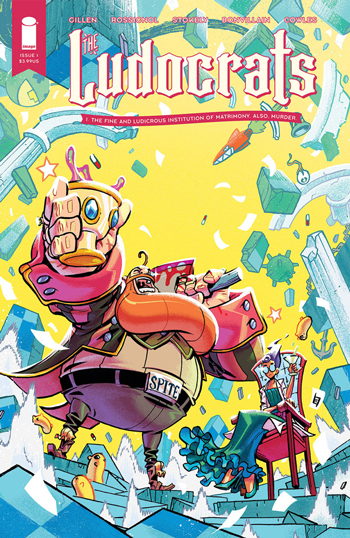 I have to come right out and say it: three pages into this comic, I knew that I wasn’t the audience for this book. Some people may enjoy this comic, but the subject matter and the tone isn’t the type of story I typically gravitate to.

That being said, this comic is kind of a not so good comic book.

It basically follows two characters named Otto and Hades. They are both part of an aristocratic group that is dedicated to having a good time. They are hedonistic and proud of it.

So we get to see them travel around causing mischief. In this issue, the two characters preside over a wedding. The whole issue feels like a Monty Python sketch that doesn’t really know when to quit.

And that is part of the problem.

There is nudity. The writers throw a bunch of jokes at us. Few stick. There are visual gags everywhere. And none of it adds up to very much. The whole book feels incredibly self indulgent and overcooked. It is not “edgy.” Rather, it’s unnecessary.

The art doesn’t do the comic any favors either. Stokely’s art could work on another book. Here, it is trying too hard to get the humor across.

Actually, the whole book feels like they are trying too hard to make something memorable.

Sadly, for me, it is memorable for the wrong reasons.