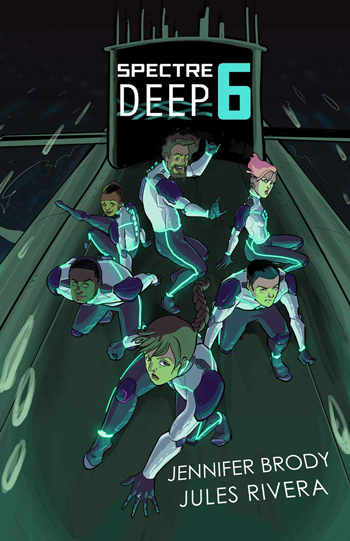 This one took me a little by surprise as it starts out a typical “team of trained specialists performs important secret missions” story but in the long run would be more aptly titled, The Secret Lives of Ghosts.

While there is an overarching comic book-style plot, it actually serves as more of a subplot. The heart of the book, as deftly presented in an alternating fashion by its creators, Jennifer Brody and Jules Rivera, deals with the secrets and personal lives—well, make that after-lives—of our heroes.

Basically, all of the protagonists are dead.

They have been revived by a secret government organization and installed into human suits but they’re essentially ghosts who use their ghostly powers to do the dirty work others can’t.

If they’re good at their jobs, they get “passes” that allow them a certain amount of time to revisit the lives they left behind when they died. As one character says, “The funny thing is when you die, your life goes on, but you just don’t happen to be in it.”

So each of the members of the team “haunts” his or her own past, checking on kids, cats, spouses, bosses, and secrets best left hidden. It’s these sections that are much more interesting than the heroes/villains plot.

That part of the story eventually comes together, too, though and ties in with one of the personal secrets, leaving us hanging for volume two of a promised three volumes.

The action sequences are well-drawn in the modern style of these types of graphic novels, the character sequences nicely written, and the overall book a good read. Not a great read, but a good read, and an entertaining way to spend some time if you find yourself stuck at home.