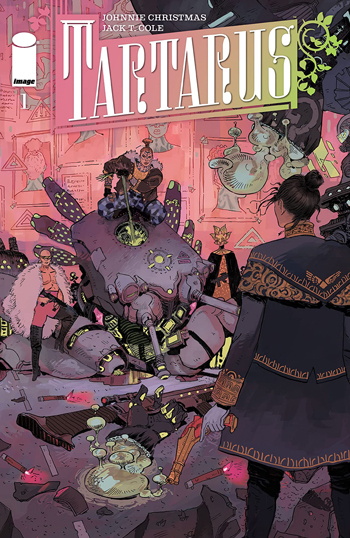 This book is a funny and fast first issue. It is 44 pages to start and it is a hell of a lot of fun. Tartarus follows a young cadet in the Baxna Military Academy named Tilde. She is an awesome and well developed character and is really unique.

The story is a really interesting science fiction tale.

Tilde learns that everything in her life is a lie, as she discovers that she is the daughter of a late, but ruthless warlord of the colony called Tartarus. Tartarus is filled with all sort of murderous scum which is not a good thing.

Tartarus is also an important component in the galactic war that is happening. The Empire finds out about Tilde’s existence and they very quickly try to do a frame job on her. Tilde is then forced to fight back and try to escape.

It is a lot of fun watching Tilde try to deal with her circumstances in the first issue. She fights back against the establishment that is trying to frame her. She is also trying to figure out just who she is and where she came from.

The artwork by Jack T. Cole is quite magnificent. He is a really underrated artist and really comes into his own here. This is a great science fiction comic. It is so damn interesting and I can’t wait to see what the creative team has in store for the readers next!