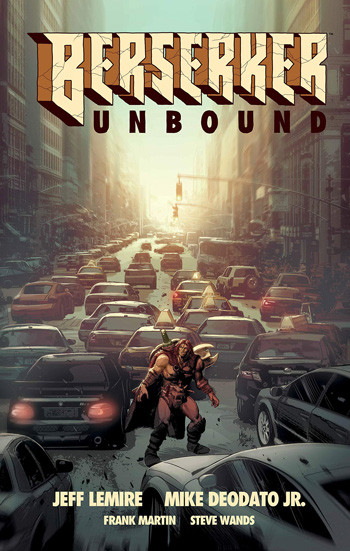 Last year, I found myself re-reading most of Marvel’s Conan stories from the 1970s for an upcoming Back Issue article so I am very familiar with them. It’s obvious that Jeff Lemire and Mike Deodato, Jr., creators of Berserker Unbound, are also very familiar with them. While they can’t call him that, their star here, Berserker, “Buddy,” the Mongrel King, is clearly that 1970s Conan.

Well, one of their stars. The other is Joe Cobb, who is just as clearly…Joe Cobb.

You see, in spite of its intimidating title, Berserker Unbound is a good, old-fashioned buddy comedy!

The flimsy plot has some extremely violent elements and some very much NSFW language but at its heart, it’s the story of two friends and how they meet and begin to form a lasting bond.

Our hero’s wife and child are killed in his long-ago world but before he can enact vengeance, he magically ends up in the modern day—well, more or less.

Pre-Covid-19. In the woods, he meets up with old Joe Cobb, a homeless black man who likes to keep to himself. Joe’s not sure what the deal is with the muscles and the swords and the armor but the two share some food. With no common language with which to communicate, each man keeps misinterpreting the other’s words. Joe takes the former Berserker into the city, a city the likes of which he has, of course, never before seen!

Alcohol gives them something in common and their bond is sealed when Joe calls the barbarian “Buddy” and he likes it. “Buddy” becomes their only word in common. Joe’s buddy is there when delinquent teens try to rob him and Joe is there for the former Mongrel King when his past magically catches up with him, all leading to a perfectly satisfying ending.

Again, the story is slight but well-written and fun, with “Buddy” and Joe’s dialogue being just realistic enough to make the pairing work.

It’s the artwork here that truly shines, though. Marvel veteran Mike Deodato, Jr has matured his art style to a point I would not have recognized it as his. There are notable and distinct traces of Tony DeZuniga and Barry Windsor-Smith, as is fitting for a Conan pastiche, but never enough to overwhelm or distract. Perhaps a dash of Wallace Wood and Bruce Jones influence, too.

And Deodato’s dynamic layouts are lovely to just look at, using as they do so many of the innovative tropes that the likes of Eisner and Steranko and Adams perfected and used so well while so many lesser artists have accidentally butchered them through the years.

And let’s not forget Frank Martin, credited as colorist, who clearly adds immeasurably to the already impressive artwork of this volume via his seamless integration with Deodato’s work.

Although labeled as a first volume, the story is done in one, which I appreciated. I would highly recommend Berserker Unbound to everyone who, like me, remembers sitting up in bed as a teenager getting lost in the latest issue of Savage Sword of Conan.