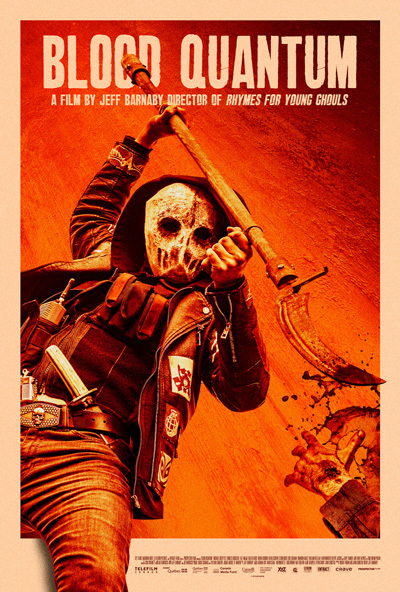 Local lawman Traylor (Michael Greyeyes) and his ex, Joss (Elle-Maija Tailfeathers), are constantly having to bail out their troubled son for his misdeeds. This time, the son, Joseph  (Forrest Goodluck), amusingly defecated on a moving car’s windshield from the top of a bridge.

When the parents arrive at the station, they find Joseph begging to be let out his cell. Turns out, his cellmate has been puking up blood and acting very strange.

This, coupled with fish and pet dogs already seeming to have come back from the dead, alert Traylor somethin’ ain’t right on the reservation.

Blood Quantum has a nice, understated and creepy opening, with Traylor’s dad bringing home his catch after a fishing sojourn. He cleans the fish, removing all of their organs – and yet they begin to flop around violently.

After that, life on the reservation is established well, then after the visit to jail things hit the ground running.

The first thirty minutes are brisk, exciting and gory, and contain several surprises.

Then, alas, we fade to black, a title reads “6 Months Later”, and the film grinds to a halt for a good, long while.

The pace picks up again, but does so in fits and starts, and never regains its footing completely.

The pacing and the uneven performances are an issue, but I would have readily forgiven them if writer/director Jeff Barnaby hadn’t committed the unfortunate sin of not fully taking advantage of his premise.

The setup and setting are novel and considering this and the largely glowing reviews I’ve seen, I fully expected a unique take on the zombie subgenre from an indigenous people’s perspective.

It’s not absent, but not a whole lot is made of it. It’s basically a standard-issue walking dead movie with some unusual details.

There is an almost throwaway moment when Gary Farmer posits a theory about Earth’s contentious relationship with the white man being responsible for the events, but it’s disappointingly fleeting and superficial.

There’s some well-executed gallows humor and some nifty (if incongruous) animated segments interspersed throughout, and it is a well-made, fitfully engaging horror outing with good makeup effects.

Still, it must rank as a missed opportunity.