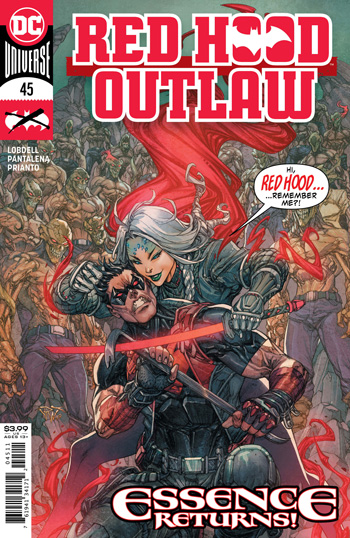 This book has been consistently awesome since it’s inception.

Scott Lobdell has written some really great and exciting stories with this comic. This issue is pretty great too as it enriches the work that he has already done. I have been enjoying this very much.

The issue starts us off years ago on the top of the “Mount of Eternal Despair.”

Jason is apparently looking for Essence and he announces his plans. It is a reckless move, but Jason is excited to get the whole thing going.

We then are pushed to the present, where the Red Hood and his gang are in the middle of a fight.

The fight is pretty damn exciting and it does go on for a lot of the issue. I didn’t mind though as it is a nicely done fight and it does have it’s fair share of drama in it.

The flashback story at the beginning of the book finds it’s way into the story as Artemis has to fight against Essence. The whole thing comes to a head in a very dramatic way by the end of the issue. It is pretty cool.

Lobdell keeps the story going strong throughout the issue. The art is good, if a tad bit weak at points. We have certainly had better on this title.

Overall though, it is a decent comic with good action and emotions throughout.