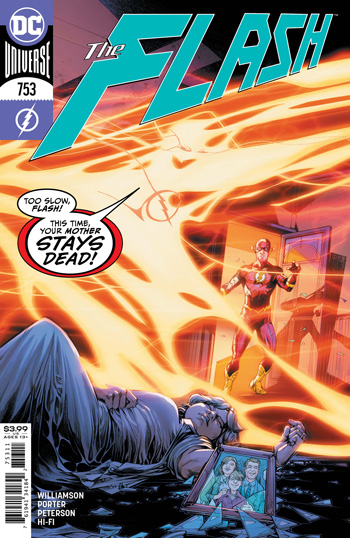 This comic book is a continuation of the “Flash Age” storyline. I have got to say, it is one hell of an issue.

Series writer Joshua Williamson has created one incredible story here. This book is incredible and it really is only getting better with each issue.

The opening page is titled “The Many Deaths of Eobard Thawne.” It is an awesome scene and rather chilling. It shows some scenes from Thawne’s past.

And then it all leads to an incredibly well drawn splash page. Thawne is running to his destiny and it is an awesome way to begin the book.

We then get to see Barry Allen in the 25th Century.

He uses the Cosmic Treadmill and makes his way there! He is immediately captured! Things aren’t looking too good for Barry. That is when the Treadmill appears again and immediately throws Mr. Allen through time again.

In the meantime, we get to go back to Central City and see Godspeed up to some antics. He is trying to find Barry in the time stream. Hopefully he gets to Barry soon. You know, before Barry’s future self kills him. It is all pretty damn fun.

By the end, Barry has a fight with Thawne. It is fantastic. The last page is one hell of a cliffhanger. It leaves you wanting more immediately. This issue is well written and the art is spectacular. I love this series. It is a top book for sure, and one of the best continuing series on the market.