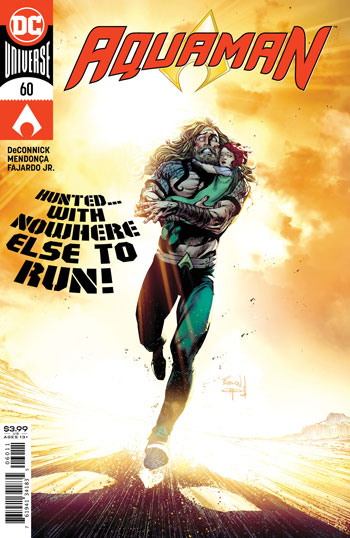 This title certainly has gone in an interesting direction.

Writer Kelly Sue DeConnick has a truly unique take on these characters. She has taken them all and given them a nice little overhaul and also gave us some decent world building. It has been a nice ride through her run thus far.

The opening sequence has Jackson dragging a Mecha Manta Pop out of the ocean. It is a beautifully rendered image by artist Miguel Mendonca. Aquaman goes out to take a look at it. The two of them have a discussion.

Jackson tells Arthur that Black Manta gave the Pop to him.

This makes Aquaman immediately suspicious. But Aquaman agrees to use the Pop to find the infant princess Andy. Aquaman then links up with it and tries to find his friend. It does gets a bit crazy after that.

Aquaman scours the ocean with his mind. He eventually finds Andy, and then takes her on the run. It gets pretty wild and exciting.

Meanwhile, Mera wakes up from her coma and she is more powerful than ever.

All of these plots come to a head by the end of this issue.

I am enjoying this book for the most part. DeConnick is doing a commendable job. I really like Miguel Mendonca’s art here as well. It is very accessible and well executed. This series is pretty decent overall and enjoyable.