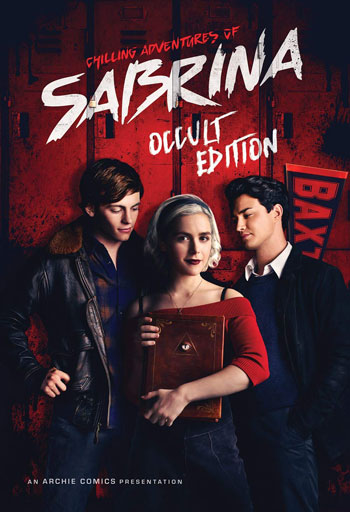 This collection exists because there is now another season of the Sabrina live-action TV series. Whether the TV series follows the narrative from this storyline I don’t know as I haven’t seen any episodes in spite of two friends personally recommending it to me, including one from Archie Comics!

I reviewed the first issue of this series when it was originally released and I recall liking it. It was dark and different but unlike the other popular Archie horror titles, I thought this one was well written, by Roberto Aguirre-Sacasa.

Re-reading that chapter now in context with its follow-ups, I’m sorry to say my opinion has changed.

I interviewed the late George Gladir, creator of Sabrina, the Teenage Witch, twice.

Even though never meant to be anything more than a one-shot teenage parody of the then-hot Bewitched TV series, it was clear to me that he was prouder of Sabrina than of anything else he ever worked on.

While I have no way of knowing what he’d have to say about this version, my instincts tell me he would use some pretty colorful language to say it.

First of all, it’s not the Sabrina we came to know and love from the comics, cartoons, manga, and the long-running sitcom. It’s more like the outrageously dark and adult Bewitched parody that Bernie Wrightson once drew for National Lampoon, only without any real humor.

Yes, the names are all the same as 16-year-old Sabrina Spellman, living with her aunts, comes into her powers, and yes, there’s a talking cat, but here there are also blood rituals, gore, death, ancient demons, sex, family secrets, and high school angst.

Oh, and did I mention Betty and Veronica as allegedly lesbian witches?

The art, by Robert Hack, is a decidedly mixed bag. The artist makes good use of a muted color scheme, with reds brightening it now and then—often as blood. His work reminds me of that of artist Michael Zulli, whose work I haven’t seen in comics in about 20 years. It’s inconsistent, though, and the fact that one of the characters in a later issue is clearly drawn in every single panel as Eddie from TV’s The Munsters (Does Butch Patrick know about this?) makes me wonder how much photo reference he uses.

The Chilling Adventures of Sabrina: Occult Edition is not a total loss as both the writing and art perk up off and on throughout and it’s still much better done all around than Afterlife with Archie or Jughead: The Hunger.

It’s just that after all is said and done, it comes across as more depressing than terrifying.