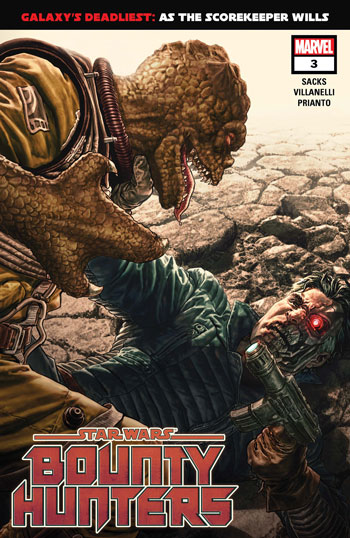 Last time, on Bounty Hunters, Beilert Valance, Bossk, and Boba Fett were hot on the trail of their old boss, Nakano Lash. After years of hiding, Lash reared her high priced head with every bounty hunter worth their salt looking to collect.

Fett took the job pro bono while Valance is desperate to find her, but is not sure what he’ll do if he’s successful.

And that’s where the fun begins.

So far, Ethan Sacks has done a great job working in a lot of characters to increase the stakes of the bounty on Lash. This time, however, Sacks’ focused on a mano a mano showdown between Valance and Bossk. Their discontent for one another in the previous issues paid off here.

Bossk followed Valance to a planet containing a significant clue about Lash’s whereabouts.

Valance and Lash’s kinship is what Bossk counted on to put his plan into motion. Valance spotted the Trandoshan before he could be blindsided, and the fight ensued.

Despite Valance’s cybernetic enhancements, Bossk proved to be the stronger and quicker fighter. Paolo Villanelli nicely illustrated Bossk doing a running backflip off a wall to get behind Valance and land a crushing blow.

The battle is met with even more tension as Bossk exploits weaknesses in Valance’s cybernetics. How Bossk obtained this information is quite clever because it showed he never trusted Valance from the jump. With his enhancements out of play, Valance used his human mind to tip the scales in his favor.

Sacks and Villanelli create an exciting blend of story and action.

Sacks filled out narrative strokes of this underworld tale by increasing the amount of scum and villainy to enter the fold. The artwork exhibited a bombastic action style that feels foreign to Star Wars. Then, we remember that a story revolving around two of the most feared bounty hunters fighting each other would very much be a wild street fight as opposed to Rebels and Imperials fighting it out in Pew, Pew, Pew style.

Lash emerged near the end of the book to set up the next issue.

It was a pleasant surprise since all of the characters believe she is locked away in hiding. However, we still don’t know why she betrayed her client and the bounty hunters guild, knowing the chaos she would unleash. Bounty Hunters has been an excellent read, and the Bossk/Valance scrap is worthy of the page space it consumed. In the end, I hope the big reveal involving Lash is worth the reader’s investment.