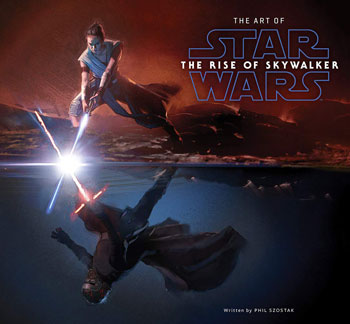 It’s impossible to be a Star Wars fan and not love The Art of Star Wars series. They expand that fantastical universe we all fell in love with and the images stir the same imagination as the films, sucking you into the adventures in an exciting new way.

The Rise of Skywalker edition seamlessly continues that tradition and reminds us that the design of Star Wars is a language in and of itself with rules and a resonant voice.

What captures your attention, first and foremost, is gorgeous imagery on every page. As it should. But these books also serve as a loose “Making of,” which is the aspect I find fascinating as a writer.

Characters brought to life, then morphed into someone/thing else.

A hundred concepts for an object with ten frames of screen time.

Accounts of how much labor and love goes into a Star Wars film and writer Phil Szostak perfectly captures the passion of the artists creating the epic visuals of the Star Wars saga.

There’s a golden rule when designing the look of the Star Wars universe; always defer to the master, Ralph McQuarrie. This is a beautiful, consistent theme throughout the narrative. Ralph McQuarrie all but created the visual language of Star Wars and the artists of The Rise of Skywalker lovingly celebrate this. A lived-in universe. Familiar, but new all the same. I myself have McQuarrie’s original trilogy images burned into my memory. What self-respecting Star Wars fan doesn’t?

Delving into The Rise of Skywalker itself, we’re walked through the process from the assembly of the creative team through wrapping of principal photography. Given great insight into what nearly was and how what is came to be.

Movie making is a fluid process and the sheer amount of work to put objects, sets and people in front of a camera takes military coordination. The Rise of Skywalker design team was hired as the script was being written and with vague story notes, artists took the liberty of creating intriguing “what if” concepts based upon where The Last Jedi left off. Most notable, the now supreme leader, Kylo Ren sitting upon his throne, a dead bug used to smuggle critical technical information and spaceships designed to harvest ice from a planet’s rings. Ideas I want to see brought to life someday.

One of the designs most often referred to, that went through the most development, was that of the Oracle. Who, or what, is the Oracle you ask?

The Oracle was whom Kylo Ren was seeking in the opening of The Rise of Skywalker to find the wayfinder that leads to Exegol. Starting as a giant head living in the bogs of Mustafar, the Oracle evolved into a symbiotic creature; going from a slug sitting on a giant head, to bird, to tentacled creature emerging from within the giant head and finally becoming a multi-limbed creature perched atop of the giant living head. In spite of the fact that this was the biggest silicon pour the creature makers had ever done, this filmed sequence was tragically relegated to the cutting room floor. How can this not be released as deleted scene?

Many nuggets of valuable lessons for aspiring artists are here for the taking. The prime example being function informing form. Best illustrated in designing Boolio, the horned character seen in the opening scenes who has intelligence about a First Order mole. Caught and beheaded, we see his head slapped down on a table in front of First Order generals. Boolio’s horn placement was designed specifically to maximize the look and motion of his head being slammed down on the table. Details viewers would never think twice about.

What specifically grips my imagination and inner 10 year old is the constant homages in early concepts.

I love seeing that Rey and Kylo Ren’s battle on the second Death Star was envisioned at one point in the hanger bay, turned on its side, full of water. Rey, swimming through detention block AA-23 and scaling up the chasm made famous by Luke and Leia’s swing across.

There’s a fine line between call back and fan service, but sometimes the fans want what they want and I feel a little sad not seeing these beloved settings gracing our screen one last time.

The Art of Star Wars: The Rise of Skywalker also gives much desired detail into what was filmed, but not given focus. During Rey and Palpatine’s fight scene, Rey fought what looked like cool red guards. But, how cool? We never got a decent shot of them. Now that I see what these guards actually looked like in detail, it’s a crime they were not given the close-up they deserved. The triangled winged Sith TIE fighters from the final air battle also belong in this category.

With hundreds of sketches and paintings of Stormtrooper variants, droids, spaceships, speeders, costumes, gadgets, environments and creatures, it’s easy to lose hours pouring over the details, imaging what these creations could have done one screen.

Imaging what could have been.

Transported once again into that far, far away galaxy.