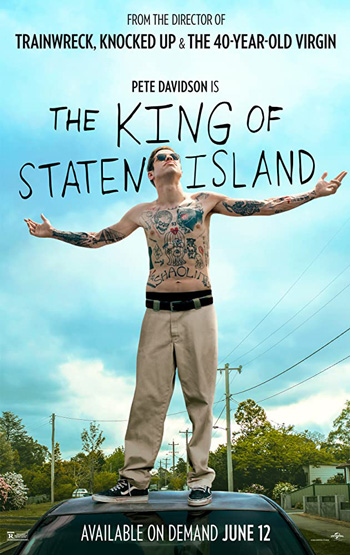 Regardless of what Staten Island might have thought of comedian Pete Davidson, who said on SNL a few years ago, “I know Staten Island isn’t all heroin and racist cops, you know. It also has meth and racist firefighters”, it’s easy to watch The King of Staten Island and believe all is forgiven.

A love letter to his hometown, Davidson co-wrote the semi-autobiographical film and plays the lead, Scott Carlin, an art school dropout, living in his mother’s basement, hangs out with his friends with dreams to opens his own combination restaurant/tattoo parlor.

The reason for his arrested development?  Scott’s father was a firefighter who tragically died when he was seven.  Still grieving, while managing anxiety attacks and some mental illness, Scott’s mother Margie (Marisa Tomei) enables Scott, while her daughter Claire (Maude Apatow) leaves home for college. Longtime friend Kelsey (Bel Powley) and Scott regularly hook up, but he has no interest in moving it forward as a romantic relationship.

After ignoring his friend’s warnings, Scott attempts to tattoo a 12-year-old he runs into on the beach, which ends with Margie meeting the boy’ father, Ray (Bill Burr), a divorced firefighter. Ray becomes Margie’s first relationship since the death of her husband 17 year prior.

Both Scott and Ray resent each other and as that escalates, Margie eventually snaps; breaking up with Ray and kicking Scott out of the house.  Scott tries to stay with Kelsey who realizes he’s using her and calls things off. Ultimately, Scott has no where to go and finds himself at Ray’s fire station, where he eventually bonds with Ray, begins to understand what being a firefighter entails, and gains insight into his father’s life and who he was.

There’s more drama than comedy in this film by Judd Apatow, and it ranks among his best.  Burr, one of my favorite stand-up comedians, shows some real acting chops and the rest of the cast is universally solid. But the real winner here is Davidson, who is charismatic and endearing, and delivers a truly subtle and engaging performance.

I have a feeling that his hometown might have come around.

The King of Staten Island is now playing On Demand