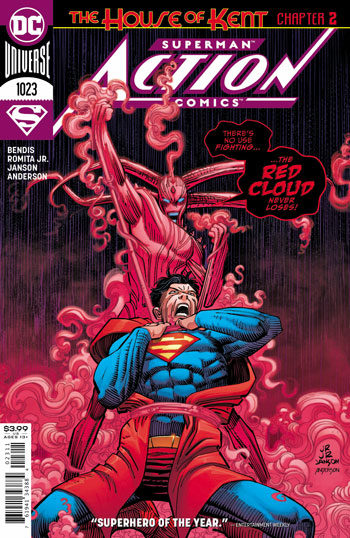 This is yet another Superman story where you can feel writer Brian Michael Bendis just going through the motions.

It is a shame too. Bendis can be an amazing writer so I am not quite sure why this is so dull. I don’t even know what is happening sometimes and that is probably the biggest shame of all.

This issue is part two of the “House of Kent” storyline. This storyline is about family and finding oneself. It involves Clark, Jon, and Connor Kent.

The issue starts off with the villainous Red Cloud causing some trouble as usual. I can’t stand this overused character by this point.

So, basically a fight erupts between the Red Cloud and all of the aforementioned Supermen. The fight is pretty clunky and it feels like nothing happened.

The second half of the book is honestly just a bunch of talking heads. It is a bunch of overwritten subplots and bad characterizations. It is hard to follow. And then we go over to the Daily Planet.

Bendis phones this one in and you can feel it here. John Romita, Jr. does his best to salvage the story but there is not a lot he can do.

Overall, this is a missed opportunity and it is apparent on each and every boring page.