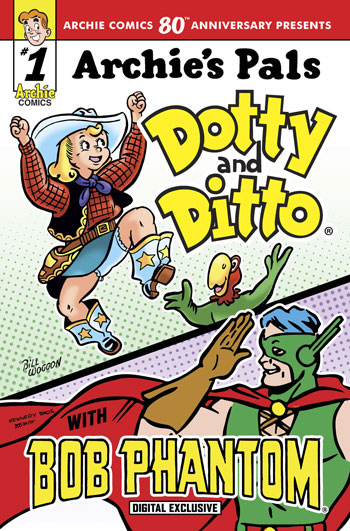 Since they don’t necessarily need to make them particularly commercial, Archie has been able to do some pretty goofy and unique digital exclusive comics, one of the most recent being this one—Archie’s Pals Dotty and Ditto, with Bob Phantom! The top half of the cover features a toothless little girl flashing her underwear and the bottom half shows a poorly drawn superhero smiling as he seemingly attempts to shield his eyes.

This actually should have been a good idea as I have been a fan of Dotty and Ditto, Bill Woggon’s perennial Golden Age backup series about a young cowgirl and her parrot, for some years now, and also a fan of the bizarrely named and costumed Bob Phantom since the days of the Mighty Comics heroes in the ‘60s. Too bad they messed it all up.

The first story, by Ian Flynn, Jeff Shultz, and Jim Amash is a new one, or at least a recent one. It’s also the best one, although that isn’t saying much, I’m afraid. Little Archie and his gang are on a field trip to the dude ranch where Dotty and Ditto live. Little Archie calls it a “camp,” though. For some reason, he becomes immediately smitten with Dotty when her handshake about crushes his fingers. A few random scenes follow until Little Reggie cons young Master Andrews into getting on a mechanical bull, from which he has to be rescued by Dotty. “Are you plum loco?” she asks, “What were you thinkin’?” even though she herself had suggested he might try the mechanical bull earlier in the story. He tells her he doesn’t remember what he was thinking and the “story” just ends.

This is followed by a fun story originally published in Pep Comics #58 in 1946. Dotty dreams she meets Super Duck, the Shield, Archie, Jughead, and other MLJ characters. You should check out the issue on the Digital Comics Museum site as it’s much better looking in the original version than the amateurishly retouched (or was it completely redrawn?) art seen here. Some of the panels look absolutely horrid! What were they thinking?

This leaves two stories drawn by Pat and Tim Kennedy (in full-on Harry Lucey mode) and featuring Bob Phantom—or rather a TV actor playing him—in Riverdale. One of the more ludicrous of the original MLJ heroes, I’ve always liked his mask. In the first story, Archie doesn’t realize the character is from a TV show and causes a scene. In the second one, Archie is the show’s biggest fan and causes a scene. The second one in particular makes no sense at all but it does have one panel of Penelope Pitstop cosplay. One doesn’t see that every day.

Archie’s Pals Dotty and Ditto, with Bob Phantom is a disappointment.