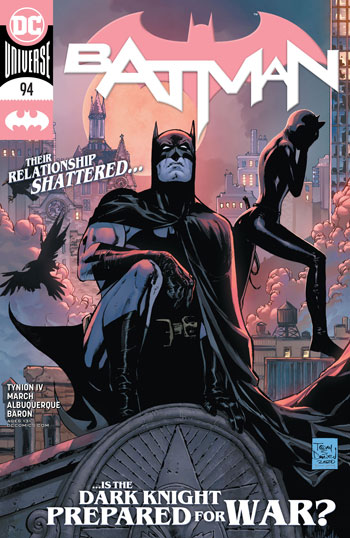 The storyline “Joker War” seems to be taking it’s sweet time getting here!

Last issue left off with Batman in a big of a pickle. Honestly, it was the only interesting thing to happen thus far in Tynion’s run.

I hope this upcoming  storyline is decent because otherwise it will be a whole lot of lead up for nothing.

The issue starts out decently, however.

We get to see Bruce at a cafe, sketching a picture about his vision of Gotham City.

This drawing has played a role in Tynion’s run thus far and it is meant to be pretty significant.

This part is drawn by Rafael Albuquerque, and I actually enjoyed the pages he drew here. He brings a certain class to it.

When the art switches over to Guillem March, reading the book becomes challenging. I actually feel like I needed to take anxiety pills!

A man appears! Bruce follows him.

We then cut to Bruce in his Batman suit, sitting bloody. He got schooled last issue and he is hurting. The Designer got him pretty good. He doesn’t have Alfred anymore but he needs help so he gets it from another character, which is intriguing.

This character is the only person who can possibly help him at this point.

By the end, we see some dark things. We see that Tynion wants to kill any and all suggestions that Batman and Catwoman should ever be together. That is kind of a sad thing. We were advancing on their relationship in King’s run. Now it feels like we have moved away from that. And that is a shame.

As we move towards the next issue, I hope Tynion knows how to pay all this off. Otherwise, we have just moved back five steps.