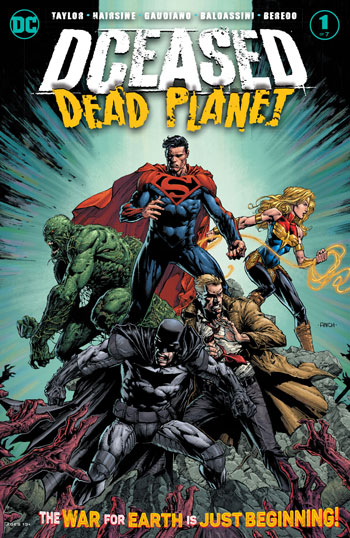 The original DCeased series was a breath of fresh air for the DC Universe and a real hit.

This book is the sequel featuring the original creative team!

I was really excited about this one going in and I have to say that I was not let down in the least! This is really great!

The opening scene has John Constantine in a bar drinking.

He is alone as the apocalypse has happened and there are zombie like heroes out there. He looks rough and when he looks over, he sees the ghosts of some of the fallen heroes. They are haunting Constantine.

This is an especially creepy and dark opening scene and I just loved it.

From there, we flash back quickly to Wonder Woman and Cyborg fighting from the previous series. We see what happened and how it relates to the current events.

We also get to see where Cyborg is now.

Then, a distress signal goes off. Damian Wayne, Jon Kent, and Cassie Sandsmark (the Batman, Superman, and Wonder Woman of Earth 2) are drawn to the dead planet Earth and they head on back. That is when things really get our of control.

It is a hell of a first issue.

Tom Taylor once again writes this issue with a sick glee that is enjoyable to read. He takes us to some really interesting places in this issue both dramatically and emotionally. The art by Trevor Hairsine is as good as the original series, if not better.

I look forward to where this series takes us from here!