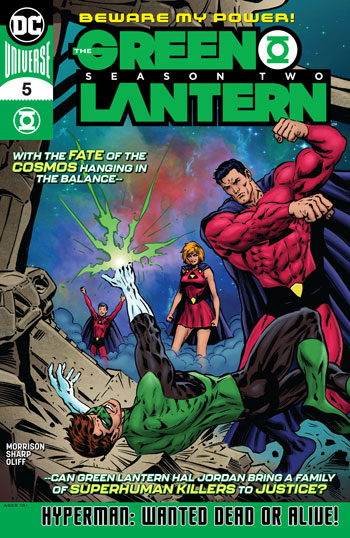 This book really has been a treat month in and month out.

Writer Grant Morrison and artist Liam Sharp have really done a great job of capturing Hal Jordan and the entire Green Lantern mythos. They respect the past and also forage ahead to make something new as well. It is a commendable feat.

Hal Jordan has to go up against two brutal killers in this issue.

Both of them have powers equal to that of Superman. How the heck is Hal going to even stand a chance? That is where we start the issue and things only get bigger and crazier from that point on.

We get to see Hal hunt down these two villains.

And then, we get to see him fight them. That is basically the gist of the issue. It actually doesn’t get any more complicated than that. And to be honest, I am fine with that.

There is a few quirks to this issue, however.

I mean, it is Grant Morrison, so there almost has to be. The various alien characters in this issue are well designed and play into the story extremely well. It is fun!

The artwork by Liam Sharp is very good. It evokes Jack Kirby perfectly as a tribute and works well with the story.

This series is constantly reinventing itself and I am liking it very much. It is a breath of fresh air for this character as well.