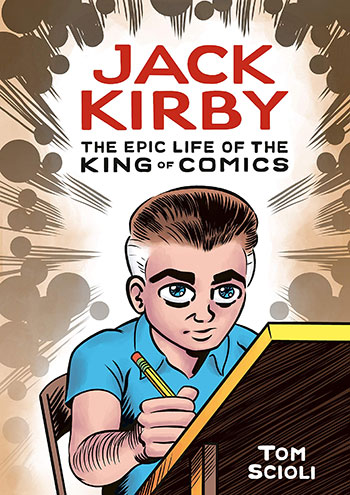 Tom Scioli, himself a Kirby acolyte of the first order (see Gødland) brings us Jack Kirby: The Epic Life of the King of Comics. While I wasn’t a big fan of Scioli’s recent work on Fantastic Four: Grand Design, I think this book, done in that same style, serves him much better.

In a way this book—although not published by Marvel Comics—functions in the same manner as the ambitious Grand Design concept, which attempts to fit all the pieces of the Marvel Universe together so that they make perfect sense, even if that involves a few retcons.

The Kirby book attempts to fit all the pieces of Jack’s life and career together in a way that makes sense, and I’m not at all certain there aren’t a few retcons involved here as well.

In spite of the fact that it’s written in first person as a literary device, this is not an autobiography, and that is emphasized right up front. It is, in fact, a highly researched—and annotated—graphic novel biography of the undisputed King of Comics.

That said, as is the case for most any biography ever written, there are instances here of pure speculation, educated guesses, omissions, somewhat mixed up timelines, and a couple of out and out mistakes.

Just as that wouldn’t necessarily destroy the value of a traditional literary biography, neither does it hurt Scioli’s graphic one in the long run.

As a Kirby fan since before the author was even born, I knew a lot of this stuff already, more than most, probably, as I worked behind the scenes as an editor on two books about Kirby by his late in life collaborator, Greg Theakston.

For the most part, Scioli gets it right—even the tiny details. He makes it flow, keeps it interesting, and strikes a good balance between Kirby’s personal and professional lives.

While Kirby is clearly the hero in his own story, and his real-life issues within the industry are portrayed in some depth, there are also villains, just as in the comic books themselves. Martin Goodman is shown as a successful but unethical businessman, long known to be true. Jack Schiff comes off as pretty unethical, too.

Stan Lee is given at least a somewhat nuanced character who, while never in real life Kirby’s BFF, and very much looking out for himself every step of the way, is nonetheless a major player in the industry and in Jack’s own life and career.

Scioli draws Jack short but with great big round eyes and thick eyebrows, looking like he stepped right out of one of the early anime cartoons that played in America, such as Prince Planet or Marine Boy. This cartoonish look sets him apart from everyone else in the book, drawn more realistically recognizable. The text, written as if Jack himself were telling his own story, is quite well done. Being familiar with Kirby’s New York accent and manner of speaking in general, I had no problem at all “hearing” him narrate events to me throughout.

We follow Jack from his earliest days in the city to the beginnings of his art career, his partnership with Joe Simon, his dislike of young “Stanley,” his WWII experiences, his courtship of his beloved Roz, the comics crash of the 1950s, the beginnings of the Marvel Age, his return to DC, then back to Marvel, and then finally to animation, where he had started nearly half a century earlier.

For the most part, Scioli makes the pieces fit. What few mistakes I spotted are things like where he has Kirby say Jimmy Olsen was canceled a just a few months after he left the title when, in fact, it lasted almost two whole years longer. Another was where his Kirby says he drew a strip about Jack Ruby a decade after Ruby was killed. More like three years.

We learn the highs and lows of his business situations, the remarkable highs of his non-stop creativity, and some sad truths about his final years. But then we also see the legacy that has outlasted his mortal life, casting Jack Kirby as one of the legends he, himself, always cherished so much. Most of the story seems to be true but some parts perhaps less true than others. But then, that’s the way it always is with legends, isn’t it?

With the public becoming increasingly fascinated with comic books in recent years, it remains a shame that so few know or appreciate the actual history behind the heroes. I’m a big Stan Lee fan, myself, but Stan Lee did such a good job of promoting Stan Lee that I’ve even seen him mentioned as the creator of Superman!

The public deserves to know Kirby’s story and Tom Scioli, the obsessive Kirby fan/writer/artist, tells it here in a way I can’t help but think the King himself would’ve liked, and in the medium Jack Kirby loved.