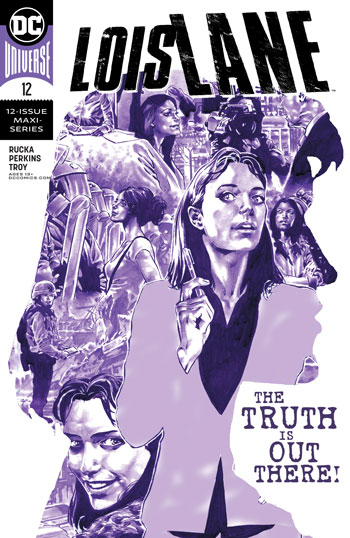 Some of the issues have been great, while others have been ok. Sadly, there is no real payoff here as the story wraps up all nice and neat. Throughout the series, multiple investigations took shape.

However, one took center stage; the attempt on Lois’ life in issue #10.

The argument of truth versus fact prompted moral questions for some of the characters.

Which truths should be told? Lois is having none of it.

The truth needs to be heard, and the people can do what they must with the information.

The scandal involving the Trump-like President ended on a whimper, and so did the Russian reporters’ death.

Perhaps, it was better to have a simple conclusion in these politically charged times rather than create something that will upset a segment of the audience. Still, it’s disappointing considering the book is about a reporter who is not afraid to rock the boat. So, rock the damn boat.

Multiverse shenanigans provided some context as to why some characters don’t remember their past lives or resemble their dimensional doppelgangers.

Lois and Sister Clarice found help for those who have difficulty living their lives due to “cracks” in the multiverse. It’s a great idea, but the result’s execution is too neat for it to matter going forward. Maybe another series with another character could bring more to the concept, but it felt like a cork is in that bottle.

Mike Perkins’ artwork throughout the series has mirrored Rucka’s writing of great and ok outings. Here, there is nothing visually to praise or pan. Serviceable illustrations and page layouts do their job well enough to cross the finish line.

Greg Rucka’s name on a comic book usually means the reader will take a deep dive into the fabric of a story. Lois Lane started off with such a promise but ultimately revoked it, and unfortunately, the final chapter served as a prime example.